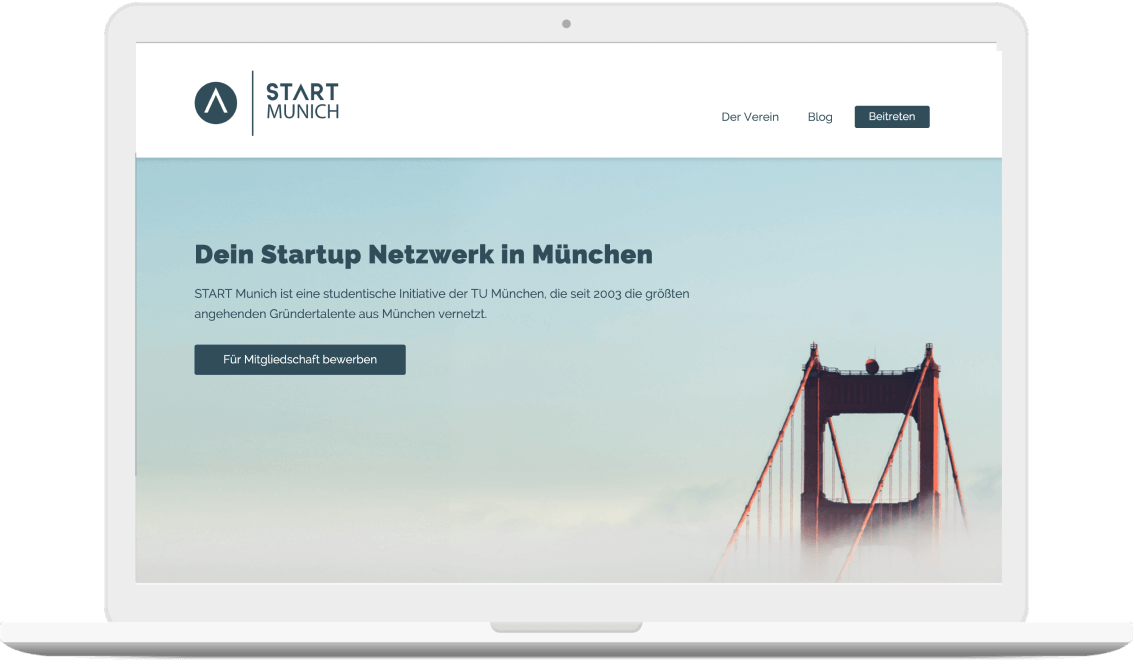 I was a member at START Munich for 2 years and in August 2018 we needed to take an important decision: Terminate the club or try to get some new applicants and make it survive.

START Munich is a student entrepreneurship initiative, which brings together students from all backgrounds who want to start their own company.

Over the years, the club got smaller and smaller, fewer people knew about it and there were only 12 members left in total.

On this day in August 2018, we were in a meeting where the new executive board should be elected. Nobody wanted to do this job anymore, organizing events that hardly anyone attended.

The old board suggested terminating the club.

My friends Csaba, Ben and I thought long about it. We all had no time to take over such an important office, but we didn’t want to give up on what START Munich has achieved since its foundation in 2003.

After a while, we decided to take the thing over before it’s too late. Our plan was to get at least a few new members who are motivated and want to bring START Munich back to where it once was: Organizing awesome entrepreneurial events and bringing together the most talented people who are eager to start something.

We were elected into the board and the first thing I did was to rebuild our websites’ design, content and conversion funnel. I spent a lot of my vacation time in Croatia on it, working in a cafe with a view of the sea while everyone was having fun.

Only a week after the launch, the first application appeared in my inbox. Then another one. And another one. It didn’t stop!

So far we always had around 3–5 applications per semester.

After the website redesign, we got over 70 applications within just 4 months. An increase of over 1.400%!

All the applicants went through a 3-step interview process and in the end, we grew the club from 13 to over 54 motivated and talented members.

We would have never thought this. START Munich was saved!

We received all applications through our website without doing any marketing and just by increasing the conversion rate. Since years, the traffic already came from the university website where START Munich was listed.

The website‘s design was good before. It had prominent Call To Actions, beautiful imagery, an explanation of what we were doing and a picture of our members. After a while staring at the page and reading the copy I realized the problem: The website didn‘t create the thought in the user “I NEED TO BE PART OF THIS!“. It was friendly, colorful and welcoming. But it didn’t appear cool, entrepreneurial or inspiring.

Because, hey, I‘m a Designer, I started with the visuals to make everything appear more entrepreneurial and inspiring.

I removed the red and reduced the colors to one single tone of dark blue. It made the texts and buttons look more minimal and clean.

‍I changed the round buttons, which looked a bit too playful, to solid, square buttons. I also made them a bit larger. It made them look more serious and stable.

The images on the website looked warm and friendly. Some friends having a good time on a mountain. They were just too generic. I replaced it with an image of the Golden Gate Bridge. What’s cooler, more entrepreneurial and more inspiring than the Golden Gate Bridge?
I continued to go through Unsplash.com and looked for images that showed „freedom“, „courage“ and other entrepreneurial things. I found this eagle image and wanted to use it immediately. The hero image was already taken so I‘ve put it in the Footer.

The typography was boring and uninspiring, so I made the headlines bigger and stronger to make them appear more courageous.

I knew I needed to rewrite all the texts on the website. Because, for example, in the application funnel, we said, that you should only apply if you are „learning diligently every day in the library and want to do something practical“. Who on earth learns every day in the library? Our ideal member should do their own projects and try to really cut down on time spent with university things.
The biggest problem with the copy was, that nowhere was mentioned what the club actually did in the past and what it already achieved. I did some research and found out that START Munich Alumni’s founded multi-million-dollar companies such as Freeletics, IDNow, Unu Motors or Bits & Pretzels. They also organized huge speaker events with over 250 participants. It was crazy to not put that on our website — so I added a section with that info. I collected all other achievements that I could find and added it to the website copy. I did my best with writing everything together and somehow it worked out.

Adding a story to the application funnel

When you click on the main call to action “Apply for a membership” you get to a second page. Before the redesign, only the acceptance criteria and the request to send your CV to us via email were on that page.

I added the story of how Felix Haas founded START Munich in 2003 and had huge business success afterward. I also removed the CTA to send your CV via email and added this Typeform application form.

Especially in student clubs, you want to know who you spend your time with. We weren‘t a lot of members, so I didn’t create a team page. I looked for a better way to create social proof and searched for the most successful START Munich Alumni to get testimonials from them. With these new success stories on the website there is no other way than to think „Oh my god I need to be a member, then I will achieve the same success!“ 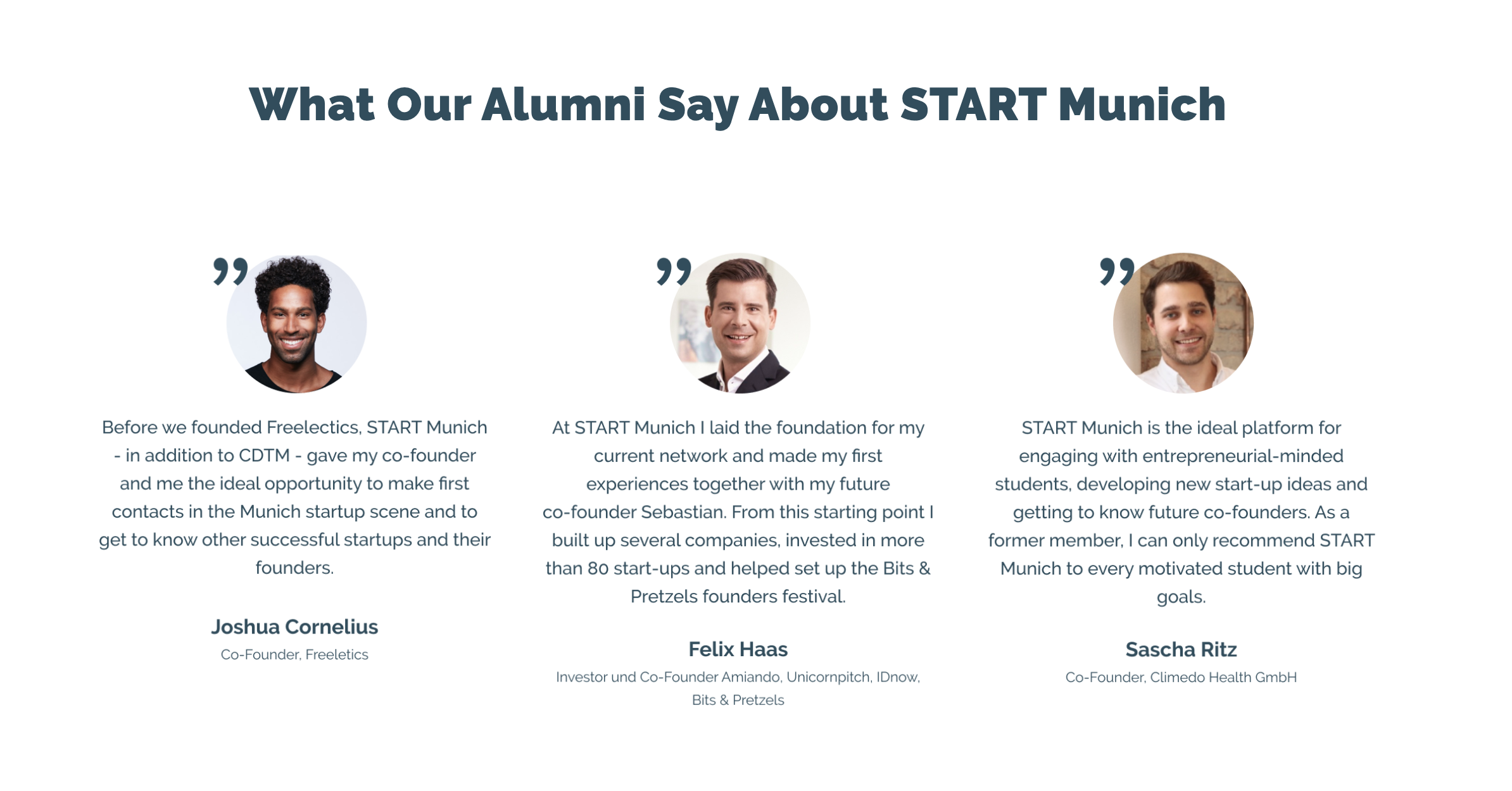 When I took over the board seat, my goal was to get 2 or 3 new motivated members who want to take over this job next year. None of us did even think about getting more than 70 applications within only 4 months. Even the total number of START Munich applicants from the last 5 years is way under 70!

Luckily I’ve collected some marketing knowledge throughout the years that was really helpful when redesigning the website. START Munich is back on track and ready to continue supporting the Munich startup ecosystem.